Even Santa Needs A Break!

A day after Christmas, Santa is back home recuperating.  Jetlagged and nursing a terrible tummy ache, he yells for an elf to get antacid in his favourite orange flavour from the nearby pharmacy.  His dietician had advised an all veggie diet to control his burgeoning weight.  So he had stuck to having just Pizzas all through his world tour.  Wasn’t it the Congressional delegation from Minnesota that had declared Pizza as a vegetable?  And who knows better than the Senate!  To force all that pepperoni down his gullet, he had swigged copious quantities of Cola which boasts of containing no traces of fruit at all.  But despite his healthy intake, Santa had managed to put on another 15 pounds, got stuck in chimneys and had to be rescued by the Fire Brigade.  So much for the surprise!

Santa was tired of being old all his life.  Imagine a life with no teen angst, no cause to rebel and no mid-life crisis!  To make it worse, his contract with “ChrissyMissy” forbade him to dye his hair black.  Nopes, he was not allowed to look young, feel young and yet he was expected to go ho-ho-ho all the time.  Stuck with the same hairstyle and delivering gifts in a horrendously red business suit, he had started feeling like a glorified courier boy.

On top of it, he had to deal with imbeciles who thought that working one night a year and spending the rest judging whether kids have been naughty or nice – life was one big party for him!  Santa wished he could show them, how it felt to work overtime on a night, when the whole world was making merry.  Carrying a gargantuan sack full of gifts.... dealing with the pressure of a deadline... navigating reindeers with zero sense of direction...sliding down all those dirty chimneys... Try spending some time in North Pole dude, with just reindeers and elves for company!

There were days Santa Claus wished he could run off to Hawaii, spend the rest of his endless life drinking Pina Colada and doing the hula in a grass skirt.

And kids have become so demanding these days!  Gone are the days when they were happy with toy soldiers and trains.  Now all of them had mutated into gizmos freaks.  How on Earth was he supposed to manage an iPad 2 or a Nintendo WII?  His elves were trained to make just toys, dammit!  A brat even had the gall to ask for a Lamborghini!  Yea right! While he had to traverse the whole wide world on a pre-historic sleigh!

Mr Claus was now seriously considering sourcing cheap replicas from China.  With North Pole fast turning into Greenland, he could always utilize his out-of-work-elves for organic farming.   He had often dreamt of a farm with stress free cows and laidback chickens.  Santa’s butter, sourced from peace loving cows.  Make your Christmas healthier with Santa-Claus Broccoli.

But this Christmas, Santa had an interesting encounter in Siberia, when he’d stopped for a coffee break at Starbucks.  While parking his sleigh, he noticed a shiny looking chariot.  Intrigued he walked inside, only to spot two bespectacled old men dressed in Santa suits carrying sackfuls of a book – Bhagwad Gita.  Yes, it had to be them!  Advani and Jaitley had come all the way from India to de-stress the Siberians.  The poor sods had mistaken the Gita as a war manual with complicated instructions.  With hundreds of books to deliver, A & J looked pretty stressed themselves.  The sweet souls they were, they left a gift for Santa as well – a DVD of the latest comic caper from Bollywood.

It was getting late.  It was time for Santa to hit the bed.  But wait, he wanted to watch that movie on the brand new DVD player he had ordered on eBay.  He changes into his PJs in startling green (yes, he hates red), grabs a packet of Wasabi encrusted crisps and slips inside his reindeer skin comforter (God bless, Rudolf XXII).

The movie was a scream.  The lead actor tries to eat spaghetti and curd with his fingers and dies.  God gives him a makeover and sends him back as a robot with a strange name.   G-one with the wind spends the next 2 hours chasing trains, men, women (not necessarily in that order).  In between all this furious action, the robotic actor sings a funny song in a nasal voice and serenades an overly expressive woman - Chhamak Chhalo.  For emotional support, he has a bunch of barely clad dancers making cute faces in the background.

(Since the author of this post was not brave enough to watch the movie herself, she cannot bullcrap anymore.)

By the time he finished watching Ra-One, Santa had tears in eyes: tears of laughter.   He couldn’t wait to watch the promised sequel of this laugh riot! 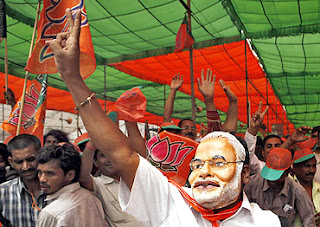 Santa switches on his Mac and starts surfing travel sites for cheap tickets to India.  He was dying to meet his doppelganger in India – thepla loving Chieftain of a Western state. In fact A & J mistook him for his double and greeted him like an old friend - Abey tu?

Yes...Santa had made up his mind.  He will retire to India, meet his long-lost brother, get his hair dyed and live happily ever after with Chhamak Chhalo.

Email ThisBlogThis!Share to TwitterShare to Facebook
Labels: Naughty arent we?