Is There An NRI Stereotype? 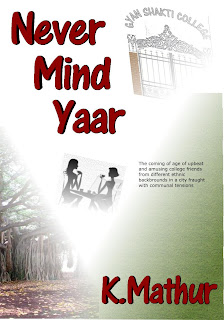 Presenting K Mathur who blogs at Never Mind Yaar and has debuted as an author with a book with the same title.  She lives in New Zealand and writes passionately on two of India’s most pressing problems - violence between communities and the Environment. Her debut novel about friendship and fun between three college students from different ethnic backgrounds is set in Mumbai — a city the three girls love but know is fraught with communal tension.  On the surface the story might look like just another college love story but the writing and story telling, according to a reviewer, make it different.   According to the author, “Never Mind Yaar” is an attitude - our tendency to feel defeated by the scale and nature of certain problems, give up and move on with a sigh and a "never mind". We ordinary Indians have so many stumblers put in our path. No running water in our taps except between 4 and 6 every morning? Never mind yaar, we can take it. We are inured – such problems bring out our creative flair – water tanks, large tubs in our bathrooms connected through a series of pipes to progressively smaller ones, an alarm clock set for 4 am... “Even today,” she adds, “when my husband uses his ingenuity to sort out some problem, he crows “Aapan kaun?” and I’m supposed to holler with a high five, Bombaiya!”In her guest post for A-Musing, she muses on the stereotypes an NRI faces.......

Recently they showed a movie on TV, here in New Zealand. In the movie some of the NZ public were against the South African Springboks being in NZ for rugby in 1981. NZ was split in two. One side said politics shouldn't enter the sporting arena, and the other, that a mostly white team from a country where the majority are overwhelmingly black was offensive. A lovely movie, denouncing South Africa's apartheid policy, recounted from the perspective of two NZ students who were against the South Africans being in NZ, and a police mole planted amidst them - a young female police officer posing as a student.

Then there was the token Indian.

He was the landlord of the two, strapped for cash, students. He was portrayed as someone who made ingenious observations that made you laugh. "We need to show that even well-dressed people are with you," he said to those students, joining them as they all got ready to march in protest with banners and placards. The students were dressed in their uniform - T-shirt, jeans and keds; and he sported a fawn coloured suit.

In another scene the students were delayed paying their rent. The Indian, their landlord, chased them into their classrooms at University yelling for the overdue rent and causing the professor to gape in astonishment. The students escaped through a back route with the Indian still yelling and chasing. Tiny scenes in a movie, not really connected to the main plot, but providing light relief.

I thought the person who acted in the movie as the Indian did a fantastic job. He is a well respected NZ actor who owns a theatre company in NZ - IndiaInk. I've been for one of his plays, "The Guru Of Chai". His name is Jacob Rajan. Nobody really remembers the actor's name when he simply plays a minor role, as he did in this movie. They remember his character - the character of the ever so slightly, foot-in-mouth Indian.

Some people in NZ and around the world know us - the entire Indian community, as if we are all identical - through such characters. It is known as stereotyping. We do it too. Remember the old Indian movies where the villainess was always Helen with a glass of wine in one hand and a cross dangling from her neck? The neckline was as plunging as the movies of old dared allow them to be and she flirted outrageously. In contrast the heroine was modestly dressed, didn't touch liquor and was pure as driven snow. That is stereo typing too.

The problem with stereotyping is that some people believe everything they hear, see or read to be the ultimate truth and juxtapose those characteristics on to real live people. They blank out everything an individual really might be. They don't want to know. They hold on with everything they have to the image they've already created. It is difficult to erase. And sometimes, as in the case of the Indian heroine, they get annoyed if the flesh and blood person turns out to be different.

I believe stereotyping has to be politely but firmly nipped in the bud each time it happens. Each person is different and unique, wherever in the world we might come from.

If I feel tempted to stereotype, which, being human, I do, quite often, I know I only have to search within and I'll unpeal a layer or a prejudice I've always lived with, albeit subconsciously. Similarly, if someone is trying to stereotype me and I understand why, their trying to fit me into a box I feel I don't belong in ceases to worry. My feeling anxious and thinking I am not who they think I am, changes to, "they aren't really looking at me but at someone who their press or their prejudice or some movies have led them to believe I am".

That understanding and the knowledge that it takes all kinds - that there are others who do see me as me - make me feel empowered and able to move on.